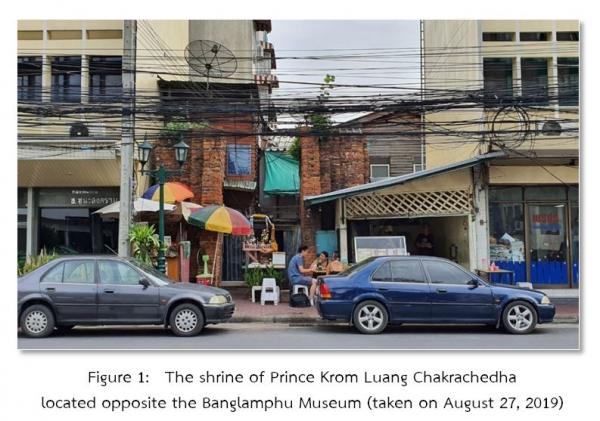 Some areas of the Banglamphu community are part of the center of the Rattanakosin Island. The city’s landscapes are surrounded by forts, walls and canals, making it looks like an island, so some scholars named this area "The Rattanakosin Island.” It includes the Grand Palace which is the former administrative center and the royal residence of former kings, and many communities where abandoned ruins, old buildings and trace of this old city have been found. Some important places in the Rattanakosin Island are religious places, royal family members’ former palaces and noblemen’s former residences. Some royal family members’ palaces have been renovated and transformed to Thai and foreign organizations. Some were demolished and rebuilt into new buildings. At Trok Khian Niwat - Kai Chae in the Banglamphu community, there is an old brick ruin looking like an entrance door located along the footpath on Phra Sumane road and flanked by shops. Actually, it is a former royal palace of a royal family member who played an important role for the Rattanakosin establishment, the new period after the Thonburi period.  At its entrance door, a wooden shrine is standing with the inscription "The shrine of Prince Krom Luang Chakrachedha”. It becomes an important shrine of Banglamphu people. However, fewer people know that the name of the prince inscribed on this shrine is the owner of this former royal palace.
Who is Prince Krom Luang Chakrachedha?
Prince Krom Luang Chakrachedha, the name inscribed on the shrine and the owner of the mentioned palace on Phra Sumane road, is King Rama I’s half-brother. He was alive from the late Ayudhya period to the early Rattanakosin period. His father was Thongdee and his mother was Ma. King Rama I and he had the same father. His former name before the accession of King Rama I was "La”. For more details please see the pedigree chart 1.
His biographical information appeared in many historical records stating that he followed his father and served him in Phitsanulok city. After his father passed away, he held his funeral, contained his relics into a conch shell, and gave it to King Rama I in Thonburi city. After the accession of King Rama I, he was given the royal title "Chao Fah”.
Prince Krom Luang Chakrachedha worked for the nation, especially in defense, from the Thonburi to Rattanakosin periods. He and Prince Maha Sura Singhanat, a younger brother of King Rama I and commonly known as Wang Na, fought together with the Myanmar troops in Chiang Mai.
King Rama I bestowed the palace on him located near the Phra Sumane fort to protect the capital city in the northeast. He had many sons and daughters, however, only one son whose name was Prince (Mom Chao) Sila Varalungkan (Sorn) appeared in the historical record during the reign of King Rama III, "The Biographical Information of Abbots in Wat Chanasongkram”. Prince Krom Luang Chakrachedha was the ancestor of the surname "Cheshtankura Na Ayudhya”.
Chart 1 The Pedigree Chart Displays People Relating to Prince Krom Luang Chakrachedha 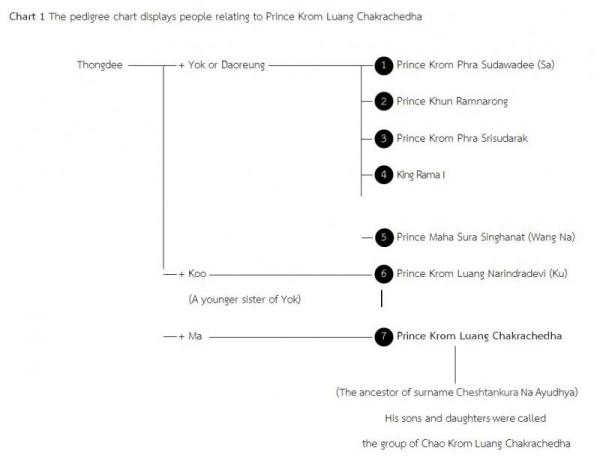 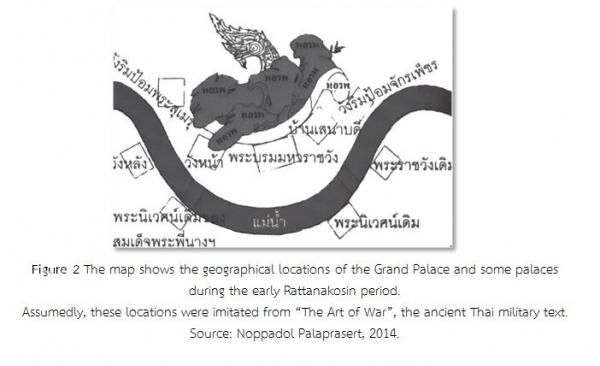 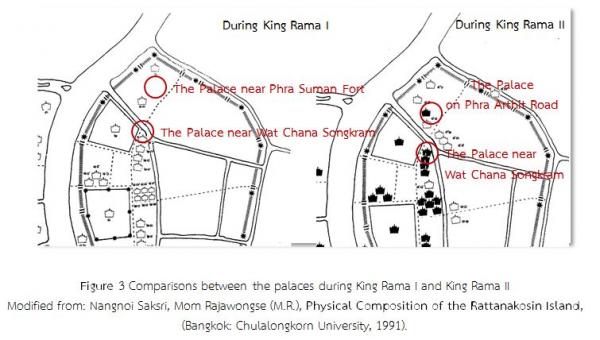 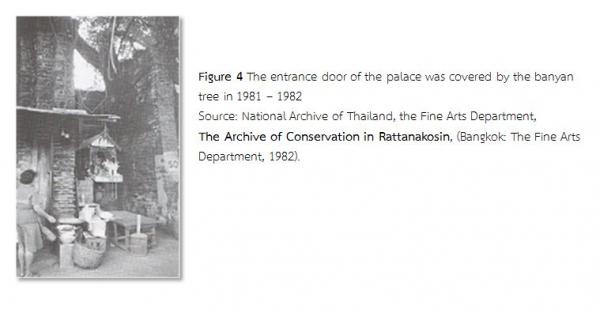 The Shrine of Prince Krom Luang Chakrachedha and Banglamphu People

At present, the palace of Prince Krom Luang Chakrachedha has bricks left without cement. These bricks are assumed to be the former arched entrance. Areas in the Trok Khian Niwat - Kai Chae community reaching to Ban Phra Athit (The Phra Athit House) including the Crown Property Bureau were assumed to be part of the former palace; however, no trace was left to identify this assumption.
Although the owner passed away more than one hundred years ago and the palace had been left for a long time, people in this community have respected him from generation to generation, reflected by the two shrines which were erected to remember him. One is in front of the entrance door at his palace; the other is in the intersection of the Trok Khian Niwat - Kai Chae community. Mrs. Boonruem Somwat, one of the members of the committee of the Banglamphu Civic Community, stated "At first, there was the only shrine in front of the entrance door. Later, people in the community thought that its surrounding area might be the former area of his palace, so they erected the new one, and people found that the prince did not like it. However, they still insisted to worship the two shrines. The new worship ceremony was held greater than the old one because of its larger area."

According to one of the committee members of the Banglamphu Civic Community, the worship ceremony is held annually on the New Year’s Day during December 31 – January 1. It is a big ceremony of people of Trok Khian Niwat - Kai Chae community and the nearby communities including people who respect him. The ceremony preparation includes ceremonial administration, contact with traditional Thai performers, a place of the Thai traditional dance show facilities, food preparation for worshipping and guests. Mrs. Pongsri Nimprasert who played a prominent role of this worship ceremony informs that the main place for holding the ceremony is in the intersection of the Trok Khian Niwat - Kai Chae community which is in front of her house. The ceremony starts with the Buddhist ceremony. The monks are invited from a temple in the Banglamphu community. Then, a troupe of dancers performs Thai traditional dance to worship the prince. They start performing from the shrine at the entrance door on Phra Sumane road and continue to the other shrine in the community. She added this ceremony is held annually. The former troupe of dancers was the Chatri Troupe coming from Chachoengsao province, and it was the same troupe performing at Bangkok City Pillar. The film was shown instead after this troupe stopped the operation. However, Prince Krom Luang Chakrachedha disliked it. Later the show has been changed to be the current troupe. 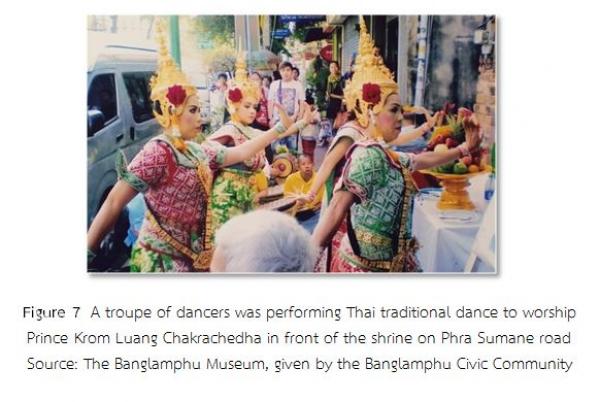 The respect of Prince Krom Luang Chakrachedha is not only presented with the worship ceremony, but also other expressions (a non-participant observation of the writer), for example, some Banglamphu people Wai (a slight bow, with the palms pressed together) while they are walking pass the shrine, some blow their horn while they are driving pass it, food and drinks are given by food sellers near the shrine. They believe that his spirit will make them successful in trading. In addition, fruits and soft drinks are provided when they are worried about expropriation, recruitment, lawsuits, etc.
The story of Prince Krom Luang Chakrachedha appearing in historical records and then becoming a sacred figure is similar to the stories of the late kings and a member of the royal family namely, King Taksin, King Rama V and Prince Krom Luang Chumphon. After they passed away, Thai people who still love and respect them transform them from historical figures into sacred figures. The Trok Khian Niwat - Kai Chae community is in the former area of him. He is not a hero of the Trok Khian Niwat - Kai Chae community, however he is praised as a holy person who helps people relieve their fears and brings good luck. The strong belief of Prince Krom Luang Chakrachedha’s spirit also unifies the community through the worship ceremony. As a museum presenting multicultural communities in Banglamphu, the Banglamphu Museum collects and researches information to try to understand people’s thoughts and expressions which have led Banglamphu people to live harmoniously since the past up to the present.
------------------------------------------------------